What’s all the fuss over the so called “Purple pound”?

You’ve probably heard of this new type of currency, the Purple Pound, but do you know what it’s all about?

Today I will endeavour to shed some light on this mysterious new phenomena and explain why our society needs to sit up and realise that there’s a new kid in town..

In order to do so I have referred to a couple of previous articles written by the BBC and Visit Britain along with figures published by the DWP. So much of the information I mention is provided thanks to these two great organisations, and the DWP.

I have merely put them together in this one article and added my thoughts.

·      The grey pound, which refers to the disposable income of older people.

But why the Purple Pound?

Speak to anyone involved in business and they’ll agree that if you want your movement, service or product to get recognised you need to work on brand identity.

Traditionally, an eye catching logo, song or tagline has been a good start but when it comes to people and money, it’s colour.

So, Grey (or sometimes silver) describes the hair colour of older people, pink has been adopted by the LGBT community and green evokes the environment.

Purple has been adopted by campaigners, charities and the government to refer to the spending power of all disabled people even though purple doesn't seem to have any symbolic significance.

So why was it chosen?

It's been difficult to track down an answer to this even though it is such a recent thing but most people believe it is rooted in the protest movement against benefit cuts.

In 2010 the disabled-run Broken of Britain blog (one of many protest blogs started at the time) launched, and chose purple for its colours.

Related: But all DAT facilities are the same

It is also a favourite colour of Baroness Tanni Grey-Thompson who wore a purple jacket during the House of Lords welfare reform debates, campaigners took this to be a symbol of solidarity. 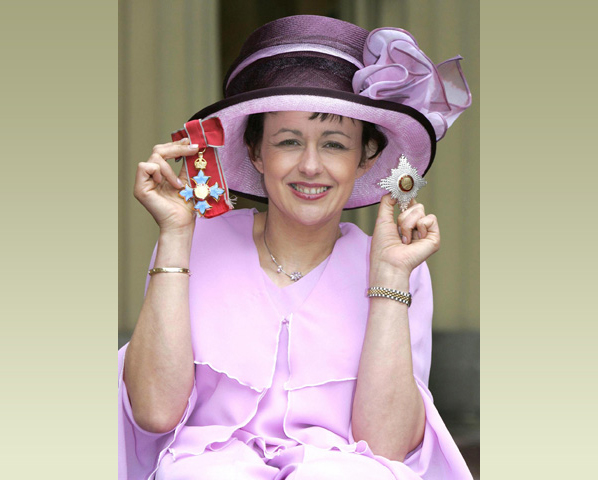 Others suggest there might also be a link to the US military veterans spending power, a reference to the Purple Heart medals awarded to wounded servicemen and women.

In 2011 Philip Connolly, thinker and policy and communications manager at Disability Rights UK, adopted the colour and started to refer to the spending power of disabled people as “the purple pound” in workshops.

"It's about identity," said Connolly, "and building a way in which people can express that economic power. Colour is a very important way of doing this."

The DWP then used the phrase “purple pound” to promote its 2012 campaign to get small and medium-sized businesses to attract disabled customers. The then minister of state for disabled people, Mike Penning, also used the phrase.

So do disabled people really have much spending power with their “Purple Pound” or is it just a clever piece of hype?

The answer has to be a resounding YES!

Currently, the UK's 11.9 million disabled people (Source, Papworth Trust ) are said to have disposable income collectively worth £80bn (this from a combined income of £212 Billion reported by the DWP in 2014 – Source)

Campaign groups regularly cite this figure and find it useful to remind UK businesses and politicians that disabled people represent a sizeable economic force that is treated as an afterthought at their peril.

Speaking to the BBC, disability consultant Mary-Anne Rankin said that “businesses should think inclusively from the very beginning of any product or service they're starting”.

She says: "You've got to think about the widest possible usage of your services and explore innovative ways of enabling everybody to benefit from them.

Because after all if your customers can benefit you're going to make more money."

Interestingly, how does this compare to other groups?

Black and ethnic minority spending power, £300bn - 12% of the population of the UK, according to the Institute of Practitioners in Advertising, IPA, 2012.

Overall UK disposable income of its 25 million households plus non-profit sector, 1.078 trillion pounds, according to the Office for National Statistics, ONS, 2012.

So, just in case you missed it –

“The DWP have reported that, currently, the UK's 11.9 million disabled people have a disposable income collectively worth £80bn, that’s THE SAME as the LGBT community..”

Imagine the uproar if the Gay and Lesbian community were habitually treated as afterthoughts in the same way..

It is vital to understand that people with access needs, including wheelchair users and sight Impaired, are constantly searching for places to stay and visit that meet and exceeds their accessibility needs and provides them with the Dignity and Independence that the able bodied just take for granted so an Access Statement is often a key marketing tool to persuade them when planning any visit or trip.

Accessibility is simply about making things easier and comfortable for customers and Visit Britain offer an ‘Easy does it’ guide that lists many simple and low-cost improvements businesses can make; from providing seating for those who can’t stand for long periods, using coloured towels in a white bathroom to provide visual contrast and vitally, wayfinding options that remove the need for human assistance.

In August 2014 the DWP released a Press release that included the following:

“Thousands of high street businesses could effectively be turning away the custom of 1 in 5 people by not attracting disabled people, the Minister for Disabled People Mark Harper said today (27 August 2014).”

The release then went on to point out:

We want businesses up and down our high streets to realise they’re excluding more than 12 million customers and their families if they fail to cater for disabled people. That’s equivalent to the populations of London, Birmingham, Leeds, Sheffield, Cardiff and Manchester combined.

It’s not just about fairness, it makes good business sense to be accessible.”

And the accessible tourism market?

It’s a no brainer that good accessibility benefits all visitors. 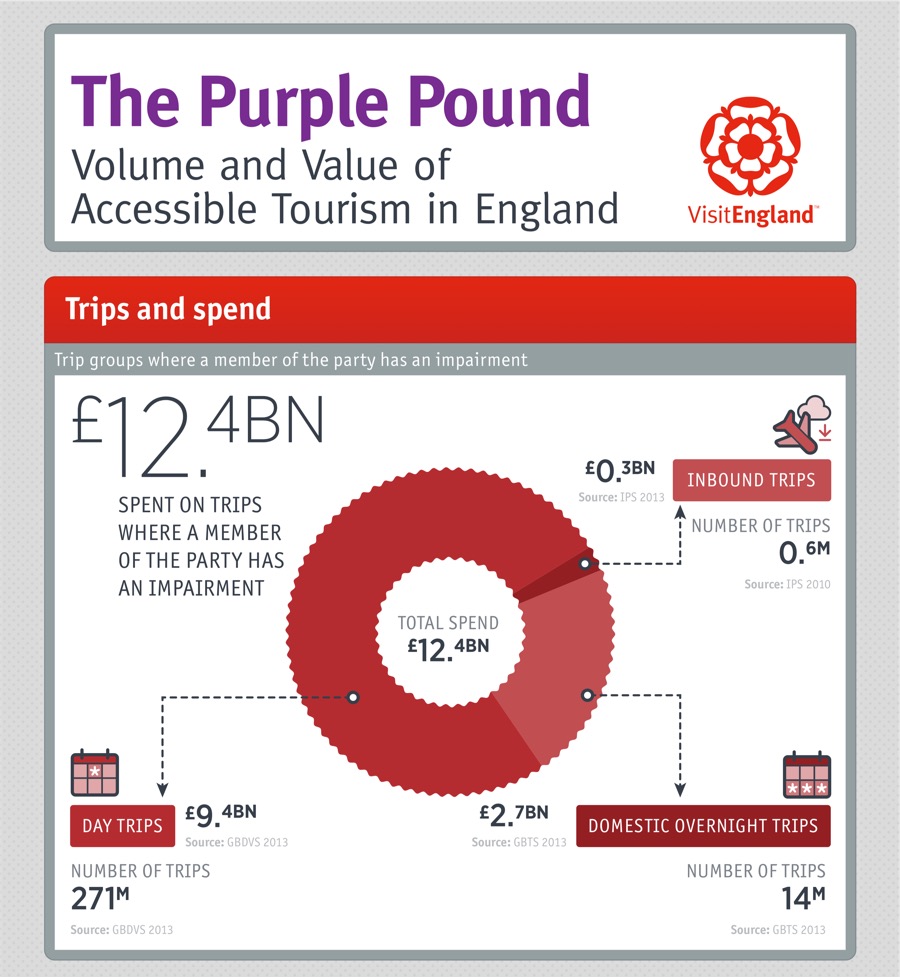 Disabled people have the greatest need for accessible facilities and services but only around 8% use a wheelchair, with many more having other mobility, hearing or visual impairments.

For accommodation businesses, the National Accessible Scheme (NAS) booklet is a complete guide to improving accessibility, including a set of mobility, hearing and visual standards for facilities managers to work through, as well as diagrams, supplier contacts and more.

(NB: The RoomMate, although classified as “wayfinding” equipment and as such would be a necessary addition for all DAT in the UK, is still too new to have been included in this edition)

We were recently contacted by Janet over at 'Your RV Lifestyle' who write informative articles from all over the world and, in this case, has written a '100 things to do in England' article which contains an extensive list of things to do and places to visit across the UK, coincidentaly, including a number of attractions who have had at least one RoomMate installed. It's very well put together and very informative for RV travellers, click HERE to check it out!

People with health conditions and impairments – and their travelling companions – spend £12.1 billion a year on tourism in England.

More than one in six people in England and Wales having an ‘activity limiting’ health problem or disability.

There are three aspects all businesses need to address to provide access for all:

For accommodation businesses, the National Accessible Scheme (NAS) booklet is a complete guide to improving accessibility, including a set of mobility, hearing and visual standards for facilities managers to work through, as well as diagrams, supplier contacts and more.

So, what does this all mean to the businesses who want a piece of the cake?

The Purple pound is an extremely large but still an, incredibly, as yet untapped source of consumer spending that is still completely missed by those that might benefit from it.

Even the ongoing campaigns to remove the blinkers of businesses and show that merely “accommodating” disabled people is actually detrimental to profits seem to still be roundly ignored.

Now, obviously, we at ADi Access primarily take the view point of the 1.87 million visually impaired UK consumers (I can’t get reliable figures on our overseas visitors) who have money to spend on places they would like to visit but either can’t or won’t visit because of the lack of thought given to them but we are also intensely motivated in the pursuit of equal opportunities for all.

To paraphrase Visit Britain “it only takes minor changes to achieve major results”.

We'd love to hear your thoughts and by all means feel free to comment.

Sources: Some paragraphs and text extracted from the original post: http://www.bbc.co.uk/news/blogs-ouch-25812302

Well, there’s no point trying to improve brilliance is there..